Posted on 14 February 2011 by DefeatedandGifted

As a review published contemporaneous to Times Square‘s release, Gilbert Adair’s review in the November 1980 issue of Monthly Film Bulletin is somewhat anomalous, in that it is largely positive towards Allan Moyle’s film. Due to its format and very small typeface, I won’t scan this review, but will instead quote its more interesting sections.

Adair argues that despite containing a number of narrative clichés, Times Square “is not only the most interesting film by far to have been produced under the problematic aegis of Robert Stigwood but one of the most rejuvenating to have emerged from anywhere in recent years. . . . Much of its success may be attributed to Moyle’s confident reluctance ever to collar his audience, either visually or emotionally.” Adair continues, “The gradual rapprochement of the two ill-matched teenaged girls, Pamela warily circling the unpredictable Nicky until capitulating on little more than a whim to her loutish tomboy charms, is exactly timed to the spectator’s own shifting sympathies, as is the embarrassment-cum-relief inspired by Pamela’s endearingly amateurish début at the Cleopatra Club.”

While many reviewers criticized Times Square for its lack of “realism,” Adair instead locates the film within the tradition of the fairy tale, writing that it is perhaps “a casual updating of Babes in the Wood,” the classic “children-in-danger” story (itself a version of the fairy tale Hansel and Gretel). Adair compares Times Square with another film whose narrative has a fantastic, dreamlike quality: “What the film lacks in credibility, moreover, it makes up in sheer narrative verve, with the pair’s vertiginously horizontal free fall through the city’s seamy underside, a folie à deux 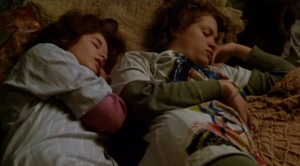 not unworthy of comparison with that of Céline and Julie [Céline and Julie Go Boating / Céline et Julie Vont en Bateau, dir. Jacques Rivette, 1974], culminating in two genuinely haunting shots: one of Pamela and Nicky vurled up in bed together — ‘like two spoons in a drawer’, in Colette’s arresting phrase; the other of Nicky, a black plastic garbage bag serving as a smart waistcoat and a highwayman’s mask painted on her face, perched atop a cinema marquee overlooking Times Square.”

Adair’s contextualisation of Times Square by invoking relevant comparison texts outside of mainstream Hollywood film is most illuminating, and he concludes by doing so with reference to the film’s most notable performance:

“But it’s difficult to predict how effectively all this would have jelled without the unique presence of Robin Johnson, who monopolises the screen from her initially unsavoury appearance trundling along 42nd Street with a shopping cart, filled with her electric guitar, amplifier and battery, to her climactic apotheosis as she suicidally leaps into a milling horde of ‘Sleez’ fanatics. In a hair-raising performance pitched halfway between Nicole Stéphane’s Elisabeth in Les Enfants Terribles [dir. Jean-Pierre Melville, 1950] 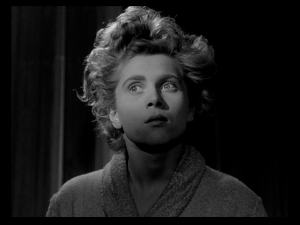 and Mickey Rooney’s punkish Puck in A Midsummer Night’s Dream [dirs. William Dieterle and Max Reinhardt, 1935], this fifteen-year-old unknown is charisma incarnate.” (The comparison between Johnson and Nicole Stéphane seems most apt; Stephane’s 2007 obituary in The Guardian notes her “butch glamour” in the role of Elisabeth, and that after Les Enfants Terribles, she did not find another role worthy of her considerable talent.)