Posted on 10 October 2010 by DefeatedandGifted 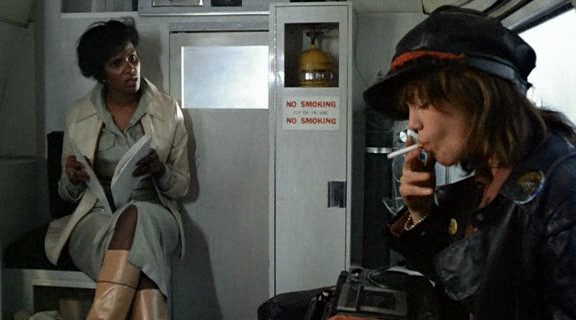 In a comment on my last post, Dañado offered a link to a page on Times Square from the “Boombox Birth” section of the “Boombox Museum“. It shows great pictures of boomboxes throughout the film, and to see this iconic product of material culture delimited in this way is fascinating for the contemporary viewer. I will argue in subsequent posts that the text of Times Square depends on the concept of nostalgia and an attendant melancholy. 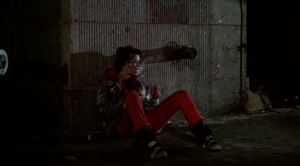 This sense of what we once had, and (can) have no more, propels both the internal narrative of Times Square, and its external world: that of the viewer, or the fan. This works on levels that are profound, but also on those that are banal or everyday. This is the case with smoking in the world of Times Square. 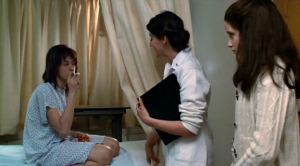 I couldn’t possibly post a picture of every extra or character who smokes in this movie, as I would use my blog bandwidth on that endeavour alone.  Suffice it to say i) it’s jarring from our contemporary perspective to view such a chuff-fest and ii) I will post a shot from each scene of Nicky and Pamela’s fuming glory.

The character of Nicky is immediately established as a “bad girl” through a series of actions and cinematic codes, not least of which is her dedication to the deadly durry.   Pamela’s first sight of Nicky is through a hospital curtain which Nicky burns with her cigarette, a move which replicates the legend of the real-life discovery of Robin Johnson, who was apparently first spied by a casting assistant 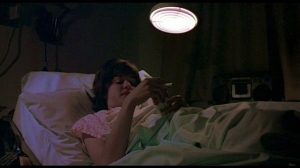 while smoking a fag outside her high school.  (While Nicky’s brand is Marlboro Red, Robin Johnson apparently favoured Kools.)  Cigarette smoking is also invoked in references to Robin Johnson’s astounding voice; kjv7782 says she is a combination of Angelina Jolie, an early David Johansen “and a 45-year old lifetime smoker (good lord that voice)“. 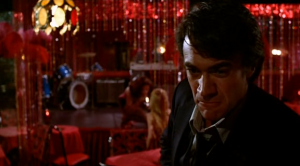 While film advertising featured a smoking Nicky Marotta, the script actually has Pamela as the heavier smoker, at one point juggling a fag in one hand and a piece of pizza in the other.  This raises two points: i) we don’t actually see Pamela and Nicky eat anything in the film; and ii) you go, Pammy!

In the film, however, we only see Pamela smoke once.  I’ll leave a description of this to Smoking From All Sides: “In a fairly close shot, Alvarado dangles an unlit cigarette 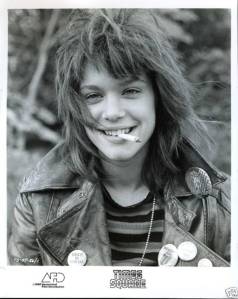 while looking at herself in a mirror, then shakes her head as if to say ‘No, that’s not what I want to look like.’ Yet in the same scene she gets a light from someone and seems to take a drag, but in this shot she’s way off in the distance and too out of focus to see much.”  (I know, pornography can be such a letdown: you’re waiting to see beaver, and instead you see a vagina.  Dying for the money shot? Instead you get semen.)  The assessment of Robin Johnson?  She “plays a wild child type who smokes and dangles in several scenes. Nothing great, but looks IRL. She kind of looks like a 12 year old Mick Jagger.”  So, a 12 year old boy, which kind of makes her look exactly like a lesbian icon.