Kamikaze Hearts in The Cleo Club

Posted on 25 March 2011 by DefeatedandGifted

Pamela Pearl (Trini Alvarado)’s place of employ in Times Square, the Cleo Club, certainly has its sartorial splendour. As Magazine Machine writes, “Why can’t all strip clubs be like this one instead of a cheesy lucite heeled den of broken dreams? Boohoo.”

The Cleo Club is described on a photo slip in the Times Square press kit as a “sleazy nitery.” The publicists are being too kind; the club is a nefarious dive. First of all, despite its elegant ambiance, it is a strip joint in the pre-gentrified New York City. Secondly, its manager is Roberto. 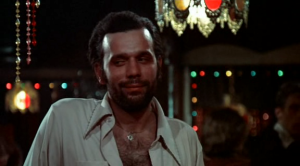 (Roberto is played by the late, great Miguel Piñero, actor, poet — he co-founded the Nuyorican Poets Cafe — and playwright. Piñero’s play Short Eyes, which is prison slang for child molestor, was written while he was in Sing 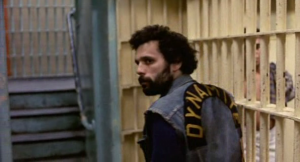 Sing Prison, and won an Obie and New York Drama Critics’ Circle Award for Best Play and a Drama Desk Award for Outstanding New Playwright.) “Roberto” was last seen here, as Go-Go –> (Piñero in the film version of Short Eyes, for which he also wrote the screenplay. The film was directed in 1977 by Robert M. Young; two years later, Young would direct Trini Alvarado in Rich Kids.)

Finally, and most frighteningly, it is a place where poetry is written and recited openly: 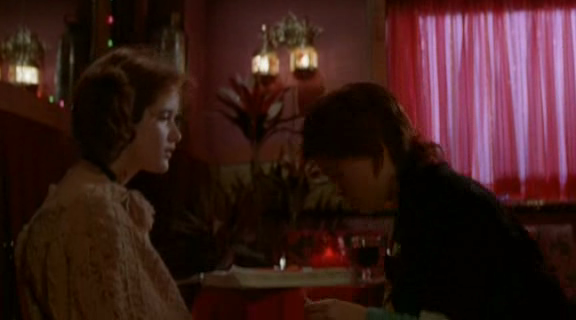 The humanity! This is certainly no place for impressionable minors.

Well, maybe if they are accompanied by a parent or guardian. 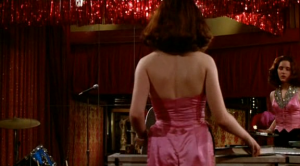 Sharon Mitchell’s cameo in this scene is a fascinating one. Mitchell, best known for her performances in numerous pornographic films, is, according to LA Weekly “[k]nown among skin-flick fans for her wiry frame and New York City streetwise sexuality.” As Robin Johnson’s presence in Times Square represented for Allan Moyle a “downtown” vibe — which I take to mean edgy, unconventional, and just plain cool — Mitchell fulfilled a similar role in the world of cinematic porn. It’s as if she is there to testify to a fellow traveller. Mitchell also conjures the truly X-rated Times Square that could not be shown in such a film. Possibly, she is there to perve at Nicky / Robin in a raw and somewhat disconcerting manner (and as this is a brief cameo, to escape the eyes of the producers / censors). I’ve certainly seen that expression elsewhere in Mitchell’s filmic oeuvre…

Although I have not seen all of Sharon Mitchell’s films, I feel confident in stating I have seen her best. Kamikaze Hearts, (dir. Juliet Bashore, 1986), described as “[u]ncompromisingly underground and fashionably feminist,” won Best Film at the Torino International Gay and Lesbian Film Festival in 1990. In the article “Kamikaze Hearts of Gutter Punk Lesbians,” Robin Bougie writes “It’s a documentary, but […the…] film is 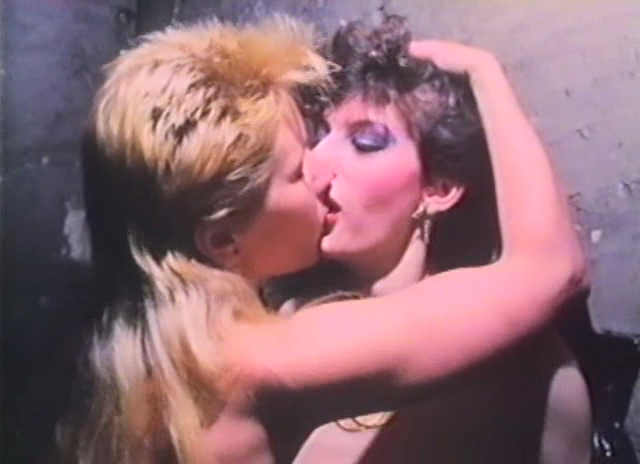 My favourite picture of Sharon Mitchell

documentary camera crew captured while behind the scenes of a cum-coated mid 80’s porn film.” Mitchell invokes this intersection and arbitrary boundary between narrative fiction and non-fiction when she tells the audience at a live show (in a venue not unlike the Cleo Club) that she has given the film the working title of “Truth or Fiction”; she says it is “a surrealistic look, I guess, at myself and my girlfriend and the way we look at the X-rated film business and our relationship with each other, and it’s very nice… I don’t know whether I’m more truth or more fiction.”

Sharon Mitchell and Tigr met while acting in "Sulka's Wedding" (1984)

For her part, Tigr (Tina Mennett) explicates her attraction to Mitchell, describing their meeting while filming a sex scene in Sulka’s Wedding (dir. Michael Striker, 1984): “She comes in: leather jacket, New York, bit of a punk. I immediately flashed to… too cool, what is a woman like this doing in a business like this? . . . I became different. I changed. I wanted to be like her. I wanted to be streetwise. I wanted to know how to use a needle… Goddamn irresponsible, gorgeous, sleazy porno slut. And she has it. And I mean, she’s this woman from New York City, who’s Italian, and she’s hot, and she speaks street language, no can can fuck with her, right? And there was some sort of power that she had that a porno person doesn’t have.” In this way, the film is a fascinating exploration of (what is more overt in same-sex) desire, in which the desire to be like and the desire to have can become conflated. We see a similar movement in Times Square where Pammy’s desire to have the attributes of the powerful, streetwise Nicky are as strong as her desire for Nicky. It is not as obvious, but I would suggest that Nicky’s desire for Pammy is imbricated in her desire to be like her.

As with my post on Freeway II, I am not trying to draw a comparison that would do a disservice to both films, but instead to suggest that like Times Square, Kamikaze Hearts raises interesting questions about desire, power and identity. And with this brief cameo in the Cleo Club, Mitch and Tigr are connected to Nicky and Pammy, two of the great lesbian couples of the cinema.

10 Responses to Kamikaze Hearts in The Cleo Club